I’m back, after a much necessary break. Life happens, and so does the reality of busy schedules!  In early April, my family visited my sister Whitney, in Austin, Texas! Left Minneapolis at 6 am and drove straight through to Austin. 19+ hours in the car, all 6 of us! We had a blast! Lots of road food and convenience store snacks on the way down, but lots of amazing food in Austin – Shipley’s Donuts (a donut shop way too close to my sister’s place), Kebabalicious (an amazing food truck serving falafel, chicken shawarma, etc.), Chuy’s (a Mexican restaurant), Moonshine (a great night out with my sisters and husband), and many others. The end of April marked the beginning of summer sports, and three colliding schedules. Oh, and a coaching husband. April and May were pretty much a blur.

In June, I visited my sister Kortney in California for a shopping, eating and dining trip. We indulged in amazing foie gras just weeks before a state-wide ban for restaurants. So fortunate to have been one of the last to have this and other amazing dishes at a quaint, French restaurant on Balboa Island in Newport Beach called Basilic. We also visited Palm Springs for a day/evening during Restaurant Week. Amazing place. Must go back with my husband! We had amazing Mexican food and margaritas at a place called Las Casuelas Terraza. Dinner at a place called Zin American Bistro – yum. And, brunch at the Ace Hotel / King’s Highway. Great food and gorgeous drinks. Kortney and her boyfriend visited Minneapolis the following weekend, and we cooked at home and dined at a local place called the Little River Inn and Bar. We also celebrated my brother and sister-in-law’s wedding in June. Busy and fun times!

In late June and early July we traveled back to Bismarck, ND for my husband’s 20 year class reunion and a week’s vacation over the Fourth of July. And, in August, celebrated a family reunion with amazing cousins from California, Kansas, Texas, North Dakota and Minnesota. It’s been a great summer spending time with family and friends, hanging out in the backyard with amazing neighbors, enjoying my patio heirloom tomatoes and fresh herbs, and creating wonderful meals at home.

September means back to school month, and a search for quick fix, easy dinner ideas…

Here’s a great healthy, Asian recipe I adapted from Martha Stewart’s Everyday Food General Tso’s Chicken. A hit for us and the kids too! Love the light (almost non-existent) batter of the pan-fried chicken, combined with chopped veggies and tossed in a slightly sweet, touch of heat sauce. We added red and green pepper, sugar snap peas and green onions.

In a large nonstick skillet, heat 1 tablespoon oil over medium-high. Lift half the chicken from egg-white mixture (shaking off excess), and add to skillet. Cook, turning occasionally, until golden, 6 to 8 minutes. Transfer to a plate; repeat with remaining oil and chicken, and set aside (reserve skillet).

Add vegetable mixture to skillet. Cover; cook until snow peas are tender and sauce has thickened, 3 to 5 minutes. Return chicken to skillet (with any juices); toss to coat. Serve with rice.

This one’s a keeper.  Mmm.  Served it to a group of friends for a weekend dinner, pre- Superbowl and pre- Valentine’s Day.  Friends+pasta, salad, bread and dessert+red wine = a great time.  We even discovered that a couple of our friends may be distant relatives…and a search for Icelandic ancestors may be in their future.  🙂

Love the addition of arugula and fresh herbs in this dish.   And, freshly grated Parmesan cheese.  Add crushed red pepper to your preferred level of spice.

Heat oil in heavy large pot over medium heat. Add onion; sauté until translucent, about 4 minutes. Add garlic; stir 1 minute. Add sausage; cook until browned, breaking up with back of spoon, about 5 minutes. Drain drippings from pot. Add wine, diced tomatoes with juice, and crushed tomatoes; increase heat and bring to boil. Reduce heat to low and simmer 30 minutes to blend flavors, stirring occasionally. DO AHEAD: Can be made 1 day ahead. Cool slightly. Refrigerate uncovered until cool, then cover and keep chilled. Rewarm over medium heat before continuing.

Serve with a salad and garlic bread.

Another amazing side dish.  Simple ingredients, tasty and healthy.  A side of sugar snap peas, diced sweet red pepper, fresh garlic and a dash of crushed red pepper, sea salt and freshly ground black pepper.  Sauteed in heavy pan with olive oil over med-high heat.  Do not overcook – peas should still be slightly firm and a vibrant green color.   Serve hot.

We were lucky enough to try some authentic tamales a few years ago while visiting family in California over Christmas.  I’ve heard and read that often, tamales are made for special occasions, i.e. anniversaries, weddings, holidays, etc.  I now fully appreciate and understand the amount of time and work that goes into these, especially after having made them myself.  I recruited Jeff to help me assemble them, so I’m sure that cut the time by half.  And, they’re gorgeous assembled – like petite wrapped packages.

I have to admit that I had to go on a hunt to find some of the ingredients.  (Note:  skip this part if you don’t want to hear about lard, as I don’t want to deter anyone from making these.)  Lard.  The one ingredient that sounds so terrible and the one that health-conscious, nutrition focused mothers tend to avoid.  I’ve always seen it on the shelf, but never, never needed it for anything and would never consider buying it as a “just in case” item for the pantry.  I guess it’s not like we eat lard everyday, but still.  Just made me cringe a little.  Ugh.  OK, getting past the whole lard thing – the tamales really are worth it.

Tomatillos are something else I don’t buy everyday.  They’re those under-ripe looking green tomatoes that are wrapped in husks.

Masa Harina and/or corn flour – there were two on the shelf and I bought the mix (that already included salt and baking powder), just add water. 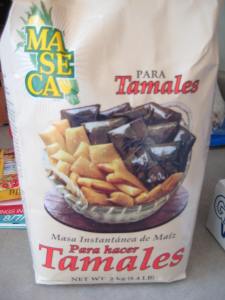 And the most unique ingredient…?  The corn husks to wrap up the tamales in preparation for steaming.  I had Jeff stop at a Latino grocery store and he got a huge bundle for about $5.00.  The package said to make sure the husks were washed, boiled and soaked in water before use, so I did that the night before and let them soak overnight. 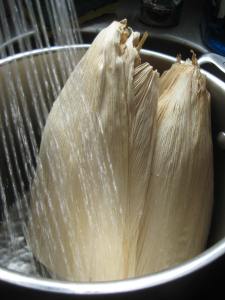 Preheat broiler. Line heavy baking sheet with foil. Arrange tomatillos on
prepared sheet. Broil until tomatillos blacken in spots, turning once, about 5
minutes per side. Transfer tomatillos and any juices on sheet to processor and
cool.

Season with salt. Mix in chicken and cilantro. (Can be made 1 day
ahead. Cover and chill.)

For dough:Using electric mixer, beat lard (with salt and baking powder, if using) in
large bowl until fluffy. Beat in fresh masa or masa harina mixture in 4
additions. Reduce speed to low and gradually beat in 1 1/2 cups broth, forming
tender dough. If dough seems firm, beat in enough broth, 2 tablespoons at a
time, to soften. 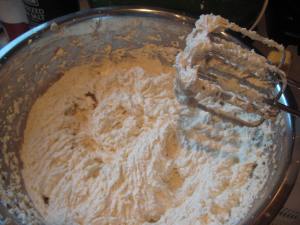 Fill bottom of pot with steamer insert with enough water (about 2 inches) to
reach bottom of insert. Line bottom of insert with some softened corn husks.
Tear 3 large husks into 1/4-inch-wide strips to use as ties and set aside. Open
2 large husks on work surface. Spread 1/4 cup dough in 4-inch square in center
of each, leaving 2- to 3-inch plain border at narrow end of husk. Spoon heaping
tablespoon filling in strip down center of each dough square.

Fold long sides of husk and dough over filling to cover. Fold up narrow end of husk. Tie folded
portion with strip of husk to secure, leaving wide end of tamale open. 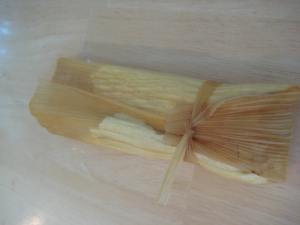 And, here they are all assembled and ready for the steamer 🙂 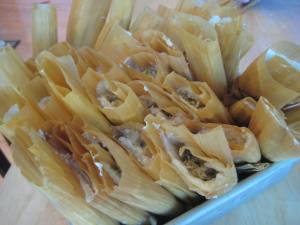 Stand tamales in steamer basket. Repeat with more husks, dough, and filling until all
filling has been used. If necessary to keep tamales upright in steamer, insert
pieces of crumpled foil between them.

Bring water in pot to boil. Cover pot and steam tamales until dough is firm
to touch and separates easily from husk, adding more water to pot as necessary,
about 45 minutes. Let stand 10 minutes. (Can be made 2 days ahead. Cool 1 hour.
Cover and chill. Before serving, re-steam tamales until hot, about 35
minutes.)  Enjoy!

You'll never know everything about anything, especially something you love...julia child

If you're afraid of butter, use cream...julia child

I think every woman should have a blowtorch...julia child